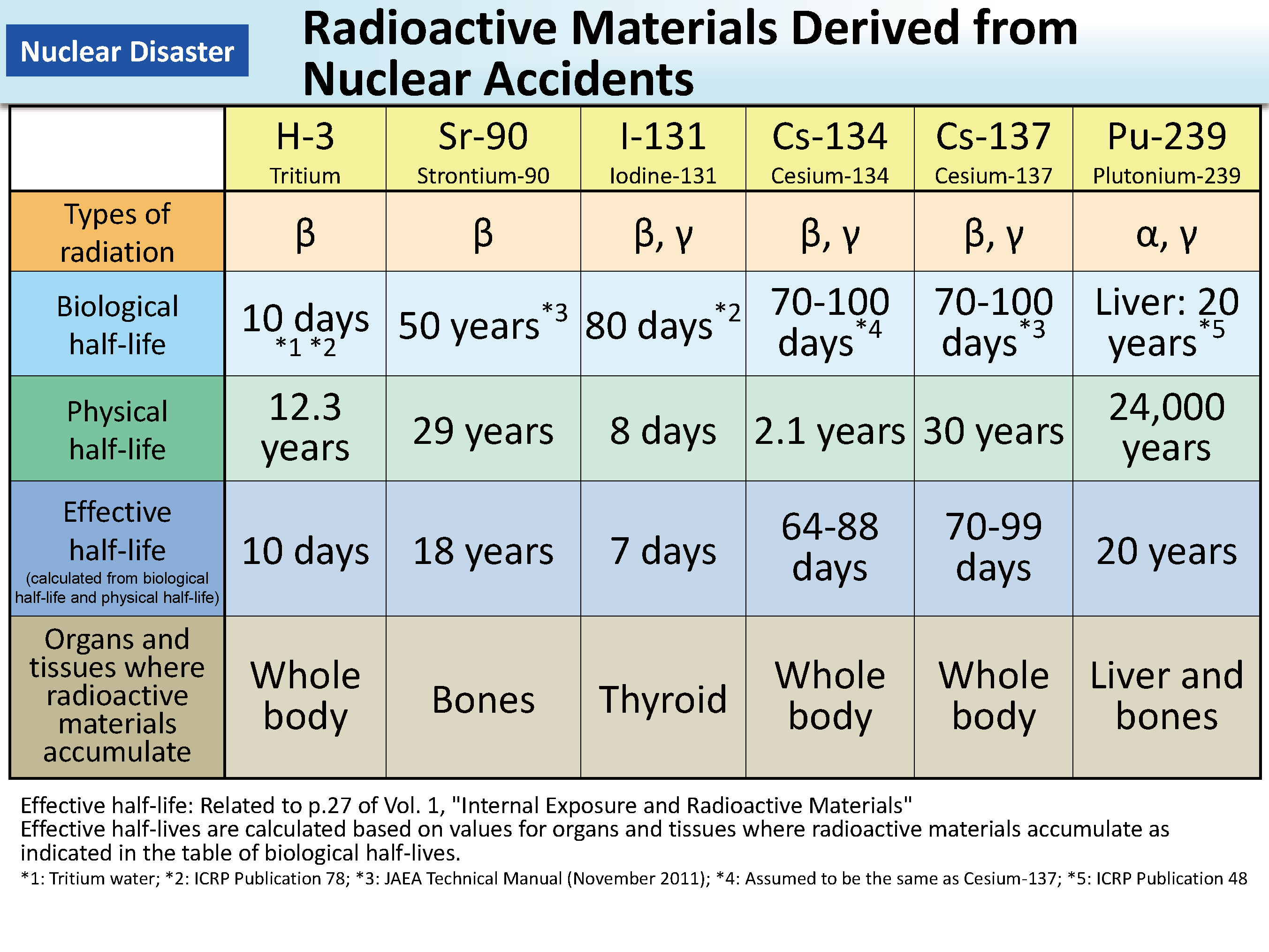 Four types of radioactive materials, Iodine-131, Cesium-134, Cesium-137, and Strontium-90, are the major concerns in relation to health and environmental effects of radioactive materials released into the environment due to the accident at Tokyo Electric Power Company (TEPCO)'s Fukushima Daiichi NPS. While various other materials were also released, they are known to have shorter half-lives than these four types or have been released in negligible amounts (p.32 of Vol. 1, "Comparison of Estimated Amounts of Released Radionuclides between the Chernobyl NPS Accident and the TEPCO's Fukushima Daiichi NPS Accidents").

Iodine-131 has a short physical half-life of about 8 days, but once it enters the body, 10-30% will accumulate in the thyroid (p.127 of Vol. 1, "Thyroid"). If this happens, the thyroid will continue to be locally exposed to β-particles and γ-rays for a while.

Two types of radioactive cesium, Cesium-134 and Cesium-137, are the major causes of contamination due to nuclear plant accidents. Cesium-137 has a long physical half-life of 30 years and continues to contaminate the environment for a long time. Since radioactive cesium has similar chemical properties to potassium, it will be distributed throughout the body, like potassium. The biological half-lives of cesium and iodine vary depending on the age of the person, and are known to become shorter, the younger the person is.

Strontium-90 has a long physical half-life, and once it enters the body, it accumulates in bones because of its chemical properties similar to calcium. Since it does not emit γ-rays, it is not as easy as in the case of Cesium-134 and Cesium-137 to detect where and how much it exists in the body. In a nuclear plant accident, Strontium-90 is also produced as a result of nuclear fission, though smaller in quantity than Cesium-134 and Cesium-137. Plutonium-239 and the like derived from the accident at TEPCO's Fukushima Daiichi NPS have also been detected, but detected amounts are almost equal to the results of the measurement conducted all over Japan before the accident (p.47 of Vol. 2, "Plutonium (Fukushima Prefecture)").