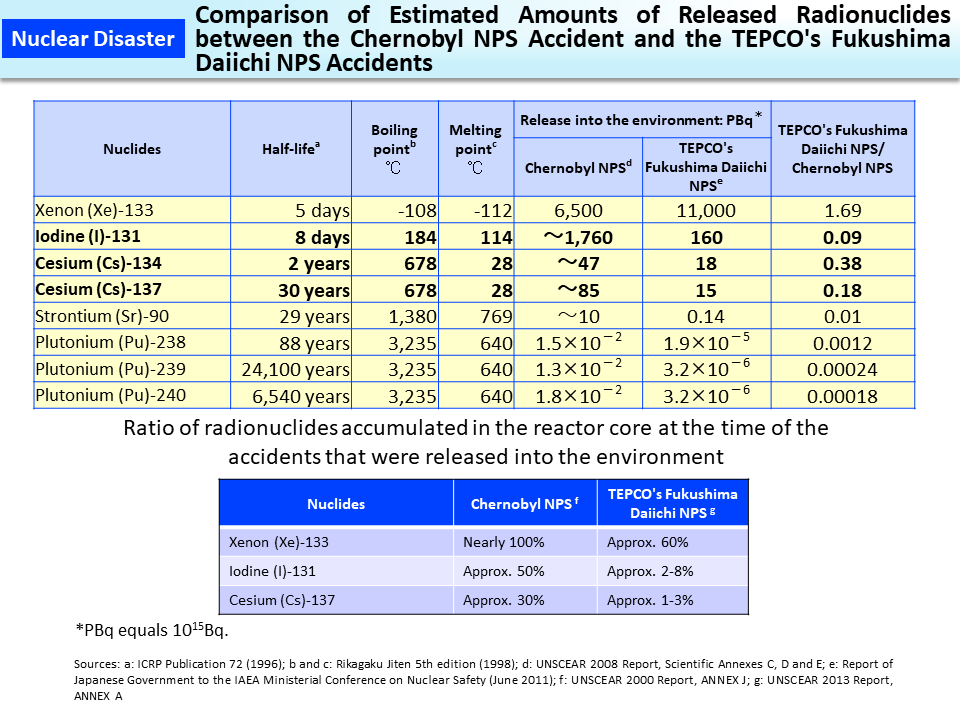 This table shows a comparison between major radioactive materials released into the environment due to the Chernobyl NPS Accident and the Tokyo Electric Power Company (TEPCO)'s Fukushima Daiichi NPS Accident.

Among them, Cesium-134 and Cesium-137 are the major radionuclides that could pose health threats. The table shows the melting and boiling points of the respective nuclides.

Cesium has a boiling point of 678°C and is therefore in a gaseous state when the nuclear fuel is in a molten state (its melting point is 2,850°C). When cesium in a gaseous state is released into the atmosphere, it goes into a liquid state when the temperature drops below its boiling point, and it further becomes particulate at temperatures below its melting point of 28°C. Thus, cesium is mostly in a particulate form in the atmosphere and will be diffused over wide areas by wind. This was roughly how radioactive cesium was spread to distant areas in the Fukushima Daiichi NPS Accident.

Although it is difficult to directly compare the released amount between the Chernobyl NPS Accident and the Fukushima Daiichi NPS Accident, the larger amount released at the time of the Chernobyl NPS Accident is considered to have been partly due to the fact that the core exploded and was directly exposed to the atmosphere. In contrast, a relatively small amount was released from TEPCO's Fukushima Daiichi NPS as extensive destruction of the containment vessel was barely avoided, and this is considered to have reduced releases of radioactive materials.