Designation of Areas under Evacuation Orders 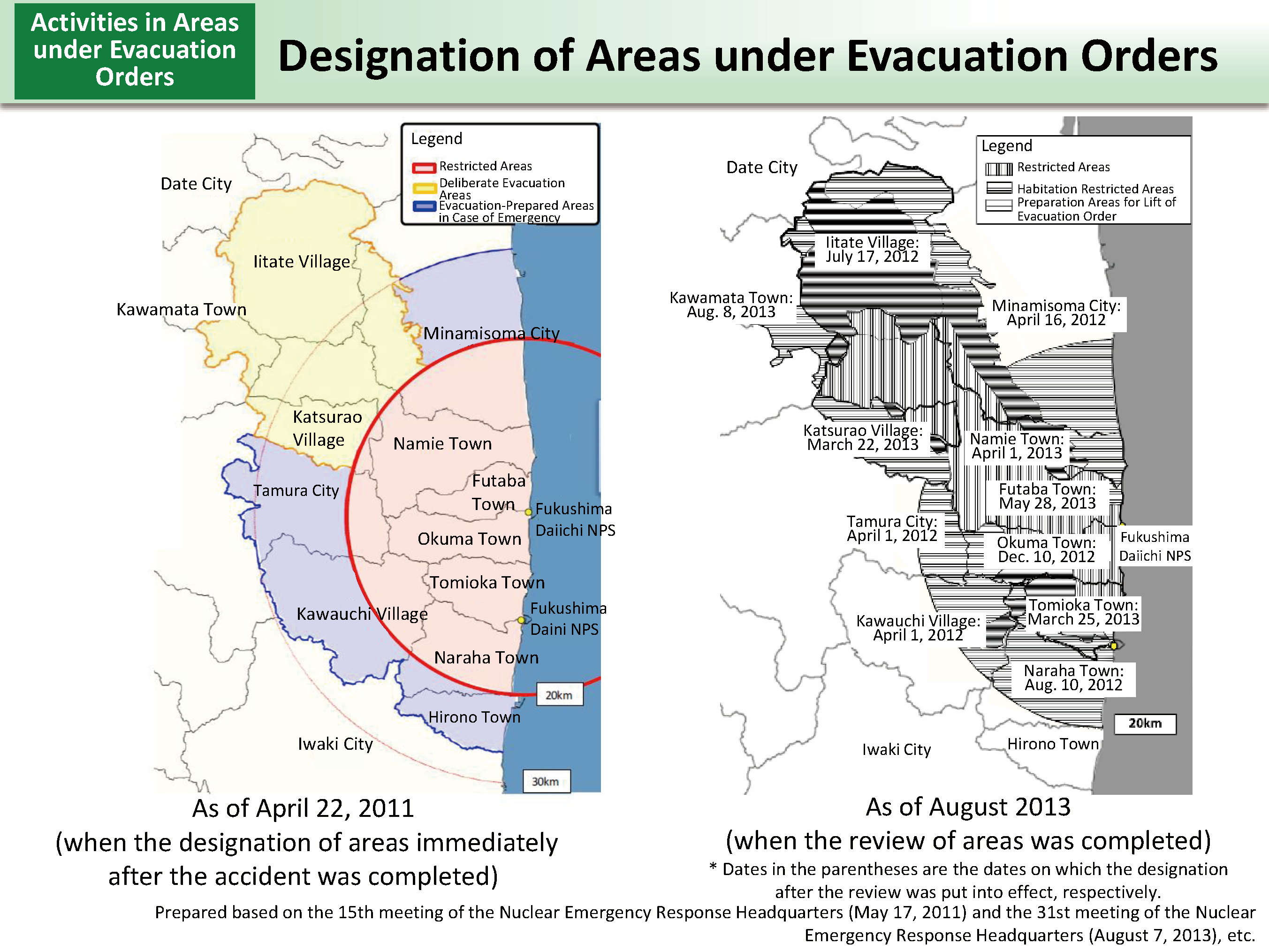 Based on Article 15, paragraph (2) of the Act on Special Measures Concerning Nuclear Emergency Preparedness, a Declaration of a Nuclear Emergency Situation was issued at 19:03 on March 11, 2011. At 18:25 on the following day, evacuation orders were issued for the 20-km zone of TEPCO's Fukushima Daiichi NPS.

On April 11, 2011, areas around the 20-km zone where annual cumulative doses would be highly likely to exceed 20 mSv after the accident were designated as Deliberate Evacuation Areas, taking into account the standard limits for radiological protection in emergency exposure situations, and areas within 20 km to 30 km were designated as Evacuation-Prepared Areas in Case of Emergency. Additionally on April 21, 2011, considering future risks due to the accident, areas within 20 km from the NPS were designated as Restricted Areas and access was prohibited in principle.

In June 2011 onward, spots where decontamination work would not be easy and annual cumulative doses would be highly likely to exceed 20 mSv were designated as specific spots recommended for evacuation, based on the results of the environmental monitoring by the national government and Fukushima Prefecture.

On December 16, 2011, the reactors reached a state of cold shutdown and it was confirmed that the discharge of radioactive materials was under control. Accordingly, on December 26, the designation of Restricted Areas was removed and it was proposed to review Areas under Evacuation Orders and to newly designate Restricted Areas, Habitation Restricted Areas and Preparation Areas for Lifting of Evacuation Orders. Upon reviewing Areas under Evacuation Orders, four problems common to all subjected areas were cited as problems to be addressed: (i) need to ensure safety and security of residents; (ii) need for decontamination and due consideration of children's radiation exposure; (iii) reconstruction of infrastructure and job creation; and (iv) compensation.

As requirements for lifting evaluation orders, the following were set: (i) it is certain that annual cumulative doses estimated based on ambient dose rates will become 20 mSv or lower; (ii) infrastructure (such as electricity, gas, water and sewer services, major transportation systems, and communication networks) and living-related services (such as medical services, nursing care, and postal services) indispensable for daily lives have been almost restored and decontamination work has progressed sufficiently centered on children's living environments; and (iii) consultations have been held sufficiently among the prefecture, municipalities and residents.

(Related to p.173 of Vol. 1, "ICRP Recommendations and Responses of the Japanese Government")