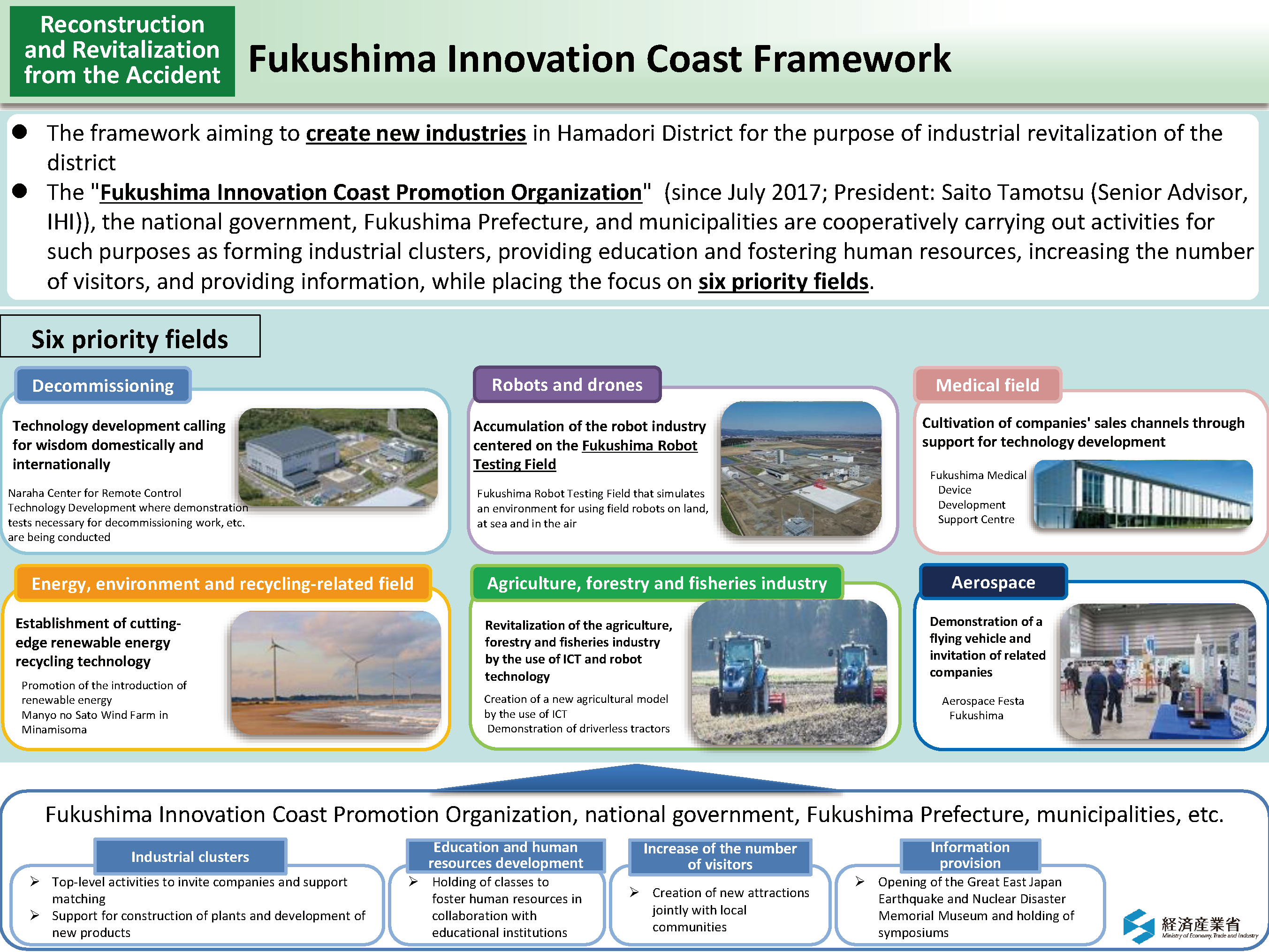 Regarding the Fukushima Innovation Coast Framework, deliberations were commenced with the aim of having people around the world witness the spectacular recovery of the Hamadori District at the time of the Tokyo Olympic and Paralympic Games in 2020. The Fukushima Innovation Coast Framework Workshop compiled the Framework in June 2014, aiming to build a new industrial base in the Hamadori District in order to recover the industry and employment in the district that was severely affected by the earthquake and the nuclear disaster.

For achieving the framework, efforts have been made to develop bases for R&D on decommissioning, research and demonstration on robot technology, and information provision (archives base), to materialize projects in such fields as environment and recycling, energy including hydrogen and renewable energy, the agriculture, forestry and fisheries industry, medical services, and aerospace, and to form industrial clusters, foster human resources and develop living environment, etc.

In December 2019, the Reconstruction Agency, the Ministry of Economy, Trade and Industry and Fukushima Prefecture jointly compiled the "Blueprint of Industrial Development Placing the Fukushima Innovation Coast Framework at the Core," which shows envisaged independent and sustainable industrial development in the Hamadori District and concrete measures therefor also in consideration of the future after the reconstruction and revitalization period. Based on the Blueprint, Fukushima Prefecture formulated a draft revision of the Intensive Promotion Plan based on the Act on Special Measures for the Reconstruction and Revitalization of Fukushima in March 2020, and the revised plan was approved by the Prime Minister on May 1, 2020.

Additionally, Fukushima Prefecture established a general incorporated foundation, "Fukushima Innovation Coast Promotion Organization," in July 2017 as the central organization in promoting the Fukushima Innovation Coast Framework towards its realization. The Organization has strengthened its system sequentially since April 2018 and became a public interest incorporated foundation on January 1, 2019. In June 2020, the Act on Special Measures for the Reconstruction and Revitalization of Fukushima was amended, and a system was newly introduced to make it possible to dispatch national public employees to the Organization while maintaining their status as national public employees.