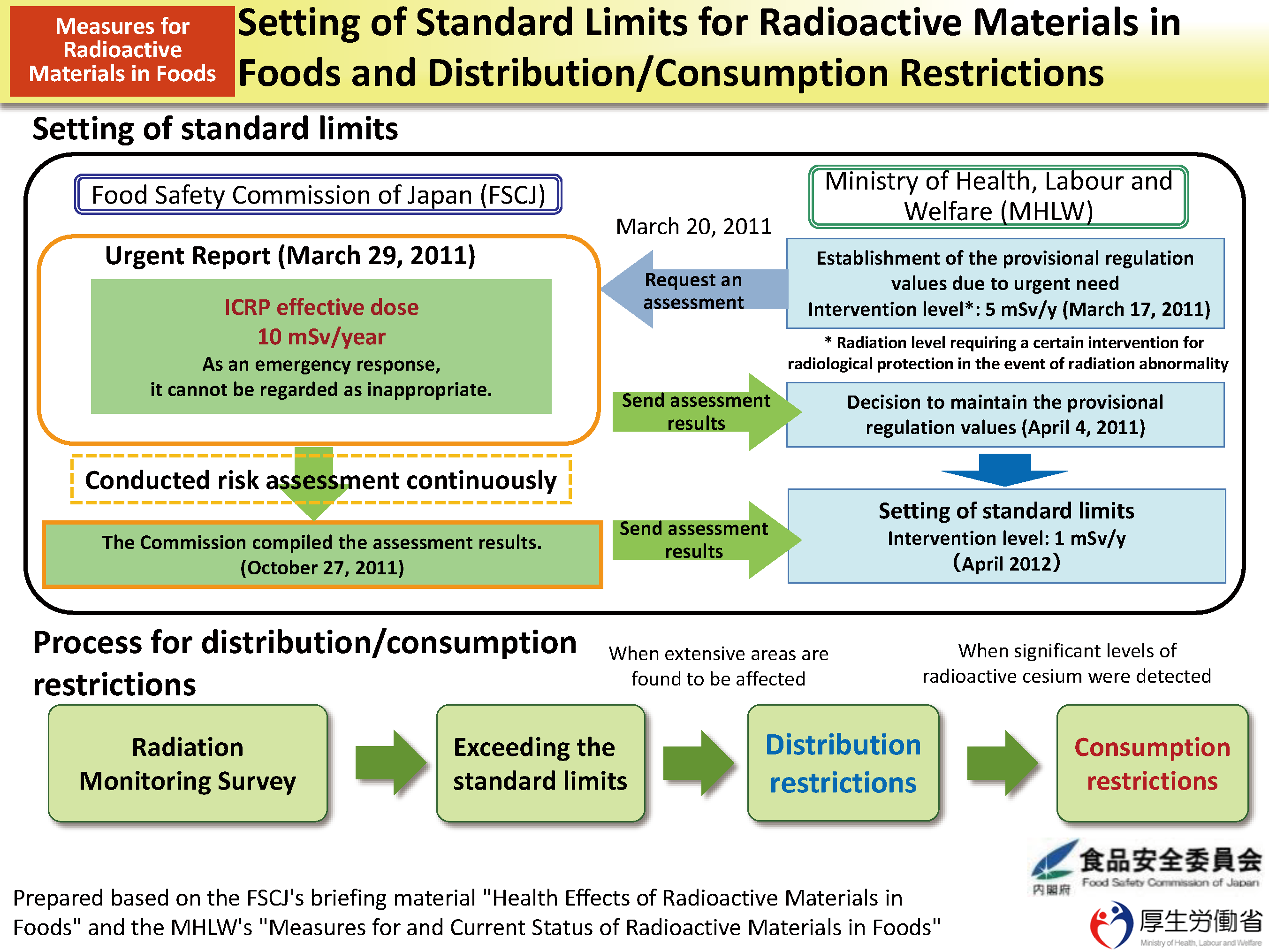 Generally, health effects caused by consumption of hazardous materials in foods are assessed by the Food Safety Commission of Japan (FSCJ), a risk assessment organization, which implements science-based risk assessments in an objective, neutral and fair manner. Based on the FSCJ's risk assessment, risk management organizations, such as the Ministry of Health, Labour and Welfare (MHLW) and the Ministry of Agriculture, Forestry and Fisheries (MAFF), formulate and implement risk management policies by establishing regulation values for each type of food.

However, under an emergency situation immediately after the accident at Tokyo Electric Power Company (TEPCO)'s Fukushima Daiichi NPS, on March 17, 2011, the MHLW set the provisional regulation values for radioactive materials in foods mainly based on the guideline values given by the Nuclear Safety Commission. Then, the FSCJ held a total of five meetings, compiled the "Urgent Report on Radioactive Materials," and sent it to the MHLW on March 29, 2011. Based on this Urgent Report, the ministry decided to maintain the provisional regulation values as an interim measure.

In October 2011, the FSCJ notified the MHLW of the results of the risk assessment, and the MHLW reviewed the provisional regulation values and set the current standard limits by reducing the intervention level to 1 mSv/year in order to further ensure security and safety and deal with the situation on a long-term basis. The new regulation was adopted on April 1, 2012.

Local governments conduct inspections of radioactive materials in foods based on their respective plans formulated in line with the guideline established by the Nuclear Emergency Response Headquarters. When any item with radioactivity concentration exceeding the standard values is found through an inspection, the relevant item is collected and disposed of. When extensive areas are found to be affected, the Director General of the Nuclear Emergency Response Headquarters (Prime Minister) issues distribution restrictions by designating the regions and the items.

When significant levels of radioactive materials are detected from a food item, consumption restrictions are promptly issued irrespective of the number of inspected samples of that item.

* Prepared based on the website of the Government's Public Relations Office and the "Concepts of Inspection Planning and Establishment and Cancellation of Items and Areas to which Restriction of Distribution and/or Consumption of Foods Concerned Applies" (March 22, 2019), Nuclear Emergency Response Headquarters