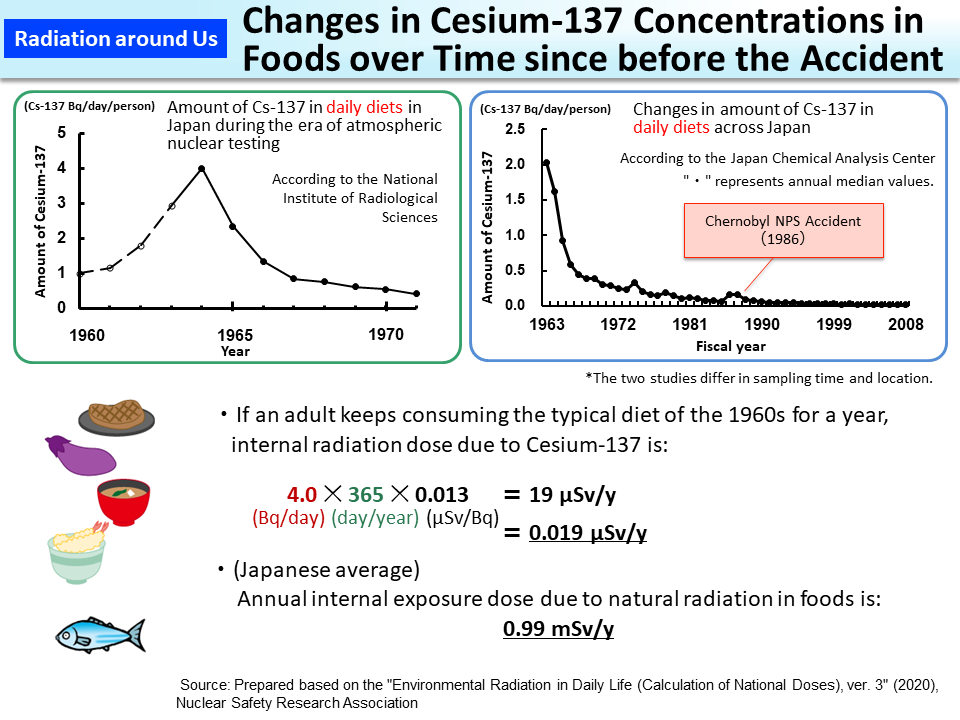 Atmospheric nuclear tests were carried out around the world from 1945 to 1980. As a result, large amounts of artificial radionuclides were released into the air and fell to Japan as well (p.78 of Vol. 1, "Effects of Radioactive Fallout due to Atmospheric Nuclear Testing"). Radioactivity in daily diets has been measured across Japan in order to find out what effects the artificial radionuclides would have on health.

Meals people actually consume are used as samples to measure radioactivity in daily diets, and this practice is useful in estimating and evaluating internal exposure doses from meals.

The amount of Cesium-137 in daily diets was highest around 1963, the year when nuclear testing, particularly in the atmosphere, was banned. It dropped sharply afterwards, and in 1975, it reduced to about a tenth of the peak amount. While there was a slight increase in 1986 because of the Chernobyl NPS Accident, the amount went down slowly until the 2000s.

If an adult were to keep consuming a typical diet of the 1960s, which had the highest level of Cesium-137, Japanese people's internal exposure dose due to Cesium-137 would be as follows:

This value is about 2% of Japanese people's internal exposure dose (0.99 mSv/y) due to natural radiation in foods.

Because the above two studies differ in the location where samples (daily diets) were taken and the number of samples, there is a difference in their numerical values.

(The black dots in the graph (right) showing changes in amount of Cesium-137 in daily diets over time across Japan represent annual median values.)