Mental Health and Lifestyle Survey: What Has Become Clear (1/5) 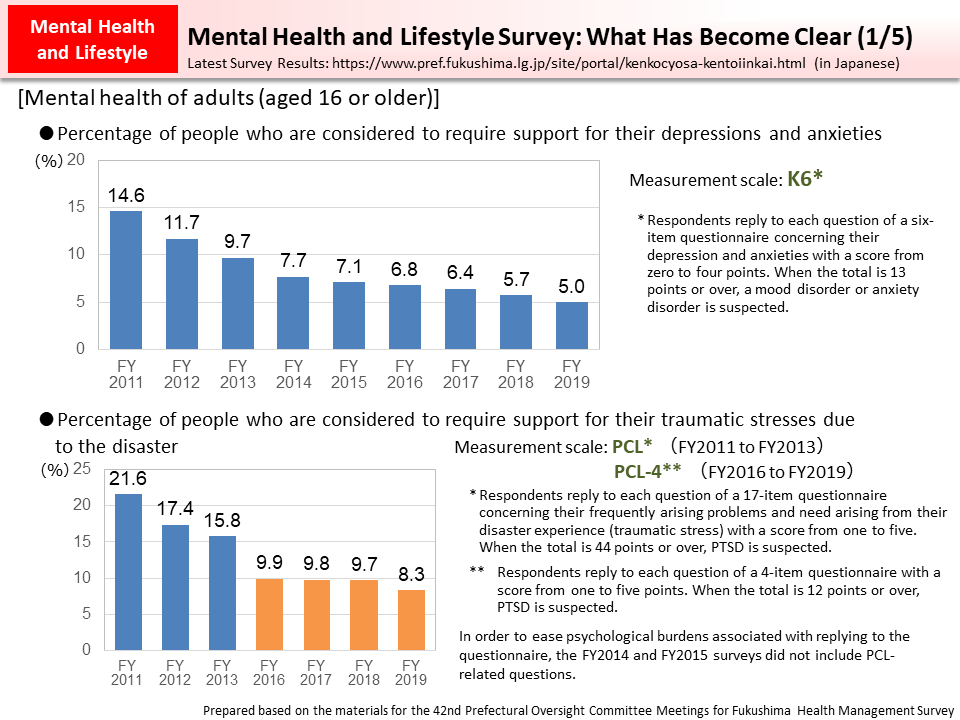 K61 is used as a scale to evaluate the levels of mental health of adults (aged 16 or older). K6 still remains at a high level (bad), compared with the value (3.0%) in a prior study in Japan (Kawakami, 2007), although the values have been declining (improving) compared with the FY2011 survey and the FY2012 survey.

1. K6: Respondents reply to each question of a six-item questionnaire concerning the frequencies with which they felt depressed or anxious during the past 30 days (such as "Have you felt extremely nervous?" or "Have you felt desperate and helpless?”). This survey targets people aged 16 or older to evaluate risks of any mood or anxiety disorder.

2. PCL (Post-Traumatic Stress Disorder Checklist): Respondents reply to each question concerning their mental and physical reactions (traumatic stress) during the past 30 days in relation to their disaster experience. This survey also targets people aged 16 or older to evaluate individuals' levels of traumatic stress. The survey was suspended for two years after being conducted in FY2011 to FY2013 and was resumed in FY2016 by significantly reducing questionnaire items (it has been confirmed that the reliability of this scale is unchanged even with fewer questionnaire items).