BOOKLET to Provide Basic Information Regarding Health Effects of Radiation (2nd edition)
Chapter 9 Efforts toward Recovery from the Accident 9.3 Waste 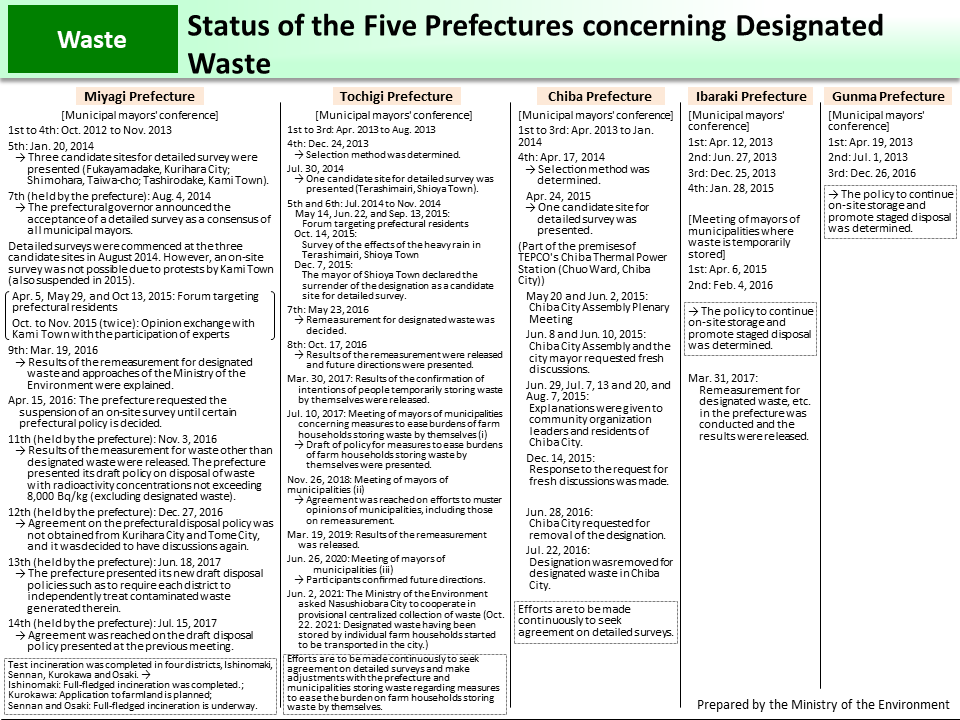 Prefectures other than Fukushima Prefecture which are in urgent need to secure Temporary Storage Sites for designated waste (Miyagi Prefecture, Tochigi Prefecture, Chiba Prefecture, Ibaraki Prefecture and Gunma Prefecture) are taking measures in accordance with the circumstances of respective prefectures. They ascertain the current status through the measurement of radioactivity concentrations, based on discussions at municipal mayors' conferences.

Regarding candidate sites for detailed surveys, Miyagi, Tochigi and Chiba Prefectures followed selection methods determined through discussions at expert meetings and municipal mayors' conferences, and presented selected candidate sites in January 2014, July 2014 and April 2015, respectively. However, detailed surveys have not been conducted due to a failure to obtain understanding of relevant regions.

In the meantime, Miyagi Prefecture determined its policy that each municipality is to make efforts to dispose of contaminated waste with radioactivity concentrations not exceeding 8,000 Bq/kg under the initiative of the prefectural government, and the Ministry of the Environment is offering financial and technical support. As part of such efforts, test incineration was commenced sequentially in four districts (Ishinomaki, Kurokawa, Sennan and Osaki) from March 2018 and was completed by July 2019. As of the end of December 2020, full-fledged incineration was completed in the Ishinomaki district and was underway in the Sennan and Osaki districts. In the Sennan district, full-fledged incineration is suspended to prioritize disposal of waste generated by the 2019 East Japan Typhoon.

In November 2018, the national government presented a provisional policy for volume reduction and centralized collection of designated waste by the unit of municipality, targeting Tochigi Prefecture and municipalities storing designated waste, with the aim of easing burdens of farm households that have been storing designated waste by themselves, while maintaining the basic policy to ultimately develop long-term management facilities. Agreement was reached on the provisional policy. Additionally, it was confirmed that the national government will compile its approach for the selection of provisional storage sites and make efforts to select relevant sites as promptly as possible in collaboration with Tochigi Prefecture and municipalities.

As for Chiba Prefecture, it is also making efforts to obtain understanding of local residents for the implementation of a detailed survey concerning long-term management facilities.

Ibaraki and Gunma Prefectures determined the policies to continue on-site storage and promote staged disposal respectively in February 2016 and December 2016. Based on the determined policies, both prefectures will repair or reinforce storage sites as necessary and will dispose of designated waste whose radioactivity concentrations have reduced to 8,000 Bq/kg or lower at existing disposal facilities in a staged manner.