Distribution of Radioactive Cesium in Soil 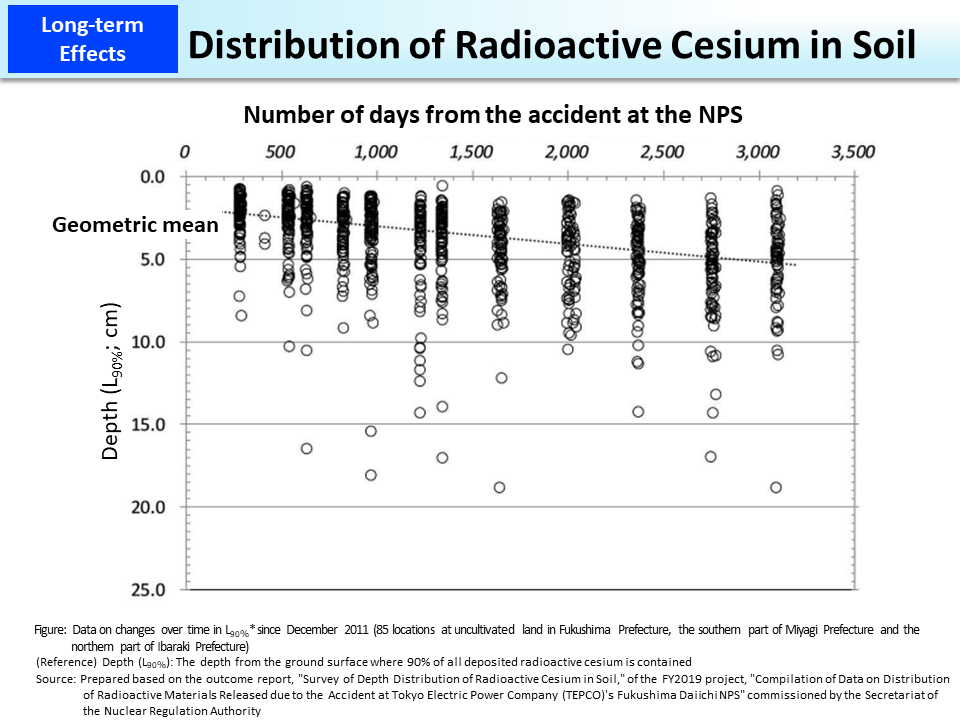 Surveys concerning the depth distribution in soil of radioactive cesium released due to the accident at Tokyo Electric Power Company (TEPCO)'s Fukushima Daiichi NPS have been conducted since FY2011 in Fukushima Prefecture, the southern part of Miyagi Prefecture and the northern part of Ibaraki Prefecture.

The depth from the ground surface containing 90% of all deposited radioactive cesium has increased gradually over time, and the geometric mean as of September 2018 was 5.1 cm.

Distribution of radioactive cesium varies depending on the status of soil such as cracks and as a result of decontamination work or deep plowing. Clayey soil contains clay minerals such as vermiculite, which strongly adsorb cesium. Cesium adsorbed in such clayey soil becomes hardly soluble in water and is fixed and retained near the surface layer of the soil for a long term (p.181 of Vol. 1, "Behavior of Radioactive Cesium in the Environment: Adsorption and Fixation by Clay Mineral").

Accordingly, radioactive cesium thus retained near the surface layer is physically isolated from the root of the types of plants that take root deeper in the soil.

The survey on effects of the Chernobyl NPS Accident that occurred in 1986 revealed that approx. 80% of Cs-137 deposited on soil due to the accident had been staying within 10 cm from the ground surface even after 14 years from the accident (Report of the Chernobyl Forum Expert Group (2006), International Atomic Energy Agency).